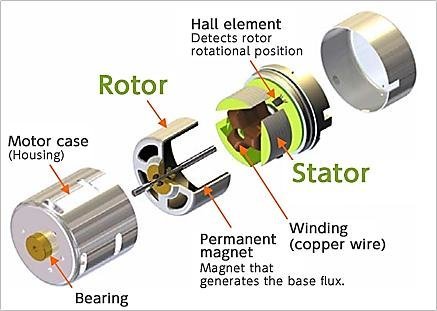 Motors are essential part of many electronic equipment’s.

Motors are used in drones, Robots, electric Fan, Elevators and many more products.

In this article I have compiled a list of different types of Motors, their applications and the driver chipsets.

This table can be used as a quick reference guide to select the right motor for your application.

Scalar Control : Scalar Control is the simplest form of controller in which the speed of the induction motor is controlled by varying the magnitude and the frequency of the 3 phase Supply. It just rotates the magnetic field produced by the stator without taking into consideration the position of the rotor.

Vector Control : The vector control technique is used to control the torque and flux of the AC motor. It is also called as Field oriented control. It is an advanced motor control method to generate three-phase sinusoidal signals that can be controlled in frequency and amplitude in order to minimize the current, which means maximizing the power efficiency. The basic idea is to transform three-phase signals into two rotor-fixed signals,
execute control algorithms and transform back to a three-phase system. Feedback on rotor position is also needed by a FOC motor control.

Block Commutation Control : Block commutation of three-phase BLDC motors is an electronic commutation scheme also known as trapezoidal commutation, six-step commutation or 120-degree commutation. In this control method, each phase conducts for 120 degrees (electrical degrees) during the positive and negative half of a Back-EMF (BEMF) cycle, and is off or un-energized for the remainder of the cycle. This algorithm requires rotor position information for every 60 degrees, and normally three Hall sensors are used to provide the rotor position feedback.

Trapezoidal control only applies in two windings of the motor leaving the third one unconnected. When the motor turns, the used windings are switched progressively generating a total of six different magnetic field vectors. This control works well in many applications but it introduces a torque ripple due to the misaligned from the optimal direction, which also represents a loss in efficiency.

Hardware Modules in a Motor Controller

The hardware modules used in a Motor control circuit are :

Three phase Inverter : The three-phase inverter’s switching devices are normally N-channel power MOSFETs for battery-powered power tool applications. During the switching, dead-time is inserted into the Pulse Width Modulation (PWM) signals to prevent the high-side and low-side MOSFETs of each inverter leg being on at the same time (i.e. shoot-through). The body diode of each MOSFET helps conduct current whenever necessary when the MOSFET is off. Two or more MOSFETs in parallel for each of the MOSFETs are commonly used to achieve higher output power. Heatsinks may be needed to extract heat efficiently from the power MOSFETs depending on the power tool’s power rating, electronic board design, mechanical design or thermal design.

Gate Drivers : Gate drivers serve as the interface between control signals of the MCU and MOSFETs. Gate drivers output the right voltage and current level to drive the gates of the MOSFETs effectively and efficiently in this PWM switching application. The input signals of gate drivers are from the PWM unit of the MCU. The MCU also executes the algorithms of block commutation with Hall sensors or sensor less FOC to control the three-phase BLDC motor.

Quadcopter : How it works and How it is made ?

Wireless technology selection : Which wireless band to use ?