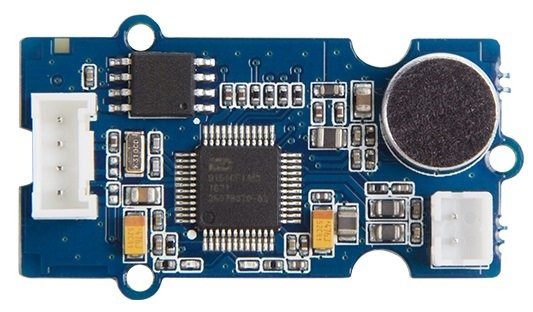 Use voice to interact with things around you can always be one of the most interesting things of IoT application, we want to make something more different and cooler. Recently we just launched the voice control solution “Respeaker” on Kickstarter and it becomes the blockbuster. However not everybody needs a Respeaker to build voice control project, sometimes people only need a simple solution, here we would like to introduce the first generation of grove speech recognizer to realize your dream of smart home easily and fast.

Grove speech recognizer is a designed for voice control application such as smart home, smart toy, voice control robot, anything you would like to control through voice, it worth a try. The board includes a Nuvoton ISD9160, a microphone, 1 SPI flash, 1 grove connector,1 speaker connector and 1 led to reflect to your voice.

Nuvoton ISD9160 is (SoC) Chipcorder that based on Cortex™-M0, it provides strong and economic solution for voice control applications. ISD9160 is not the only amazing thing in this grove. Let’s look at the microphone. Remember the uncomfortable moment when you have to speak directly and closely to the voice recognizer device to make sure it can hear you? It won’t happen this time! The microphone on grove-speech recognizer is Omni-directional, which means that whether a user speaks into the microphone from the front, back, left or right side, the microphone will record the signals all with equal gain.

This speech recognizer can recognize 22 pieces of commands including ‘start’, ‘stop’, ‘Play music’ and so on. Every time it recognizes a command, it will return a value and then the loudspeaker that connected to it will repeat the command. This value can be used to control other devices like motor, music player. We have tested it for hours to make sure it possesses a high recognition rate and a very low false trigger.